A play on words from the widely known audio term “Hi-Fi”, Wi-Fi is actually not an acronym for anything, but is used to describe the IEEE standardized protocol for wireless transmission of data. Wi-Fi enables wire-less connections between devices such as smart phones, tablets and laptops to networks (such as the Internet), using radio transmission, usually at 2.4GHz or 5GHz.

The History of Wi-Fi

Long before the Institute of Electrical and Electronics Engineers (IEEE) standardized the technology, Wi-Fi has its roots primarily from a 1903 US Patent (725,605) by Nikola Tesla, and during the second World War, when Austrian born actress and inventor, Hedy Lamarr, proposed changing radio frequencies at irregular intervals, as a means of evading interception of communication by enemy forces. The US Patent (2,292,387) was awarded to both Dedy Lamarr and George Antheil in 1942 for their Secret Communications System (S.C.S).

The technique was later refined into what we now know as Frequency-Hopping Spread Spectrum radio transmission (more details below).

The first known device of a wireless LAN (Local Area Network) was patented in 1992 in Australia, and became commercially available in the late 90s (Figure 3). These devices utilised the 2.4GHz band, a region freely available for home devices. They were external to the PC and often had separate antennas. Speed was limited to 2Mbps for these first generation devices.

Due to the nature of many wireless devices transmitting near each other, signal collision was unavoidable causing data loss, requiring retransmission. The addition of multiple channels (“frequency hopping”) in later revisions of Wi-Fi solved this problem. 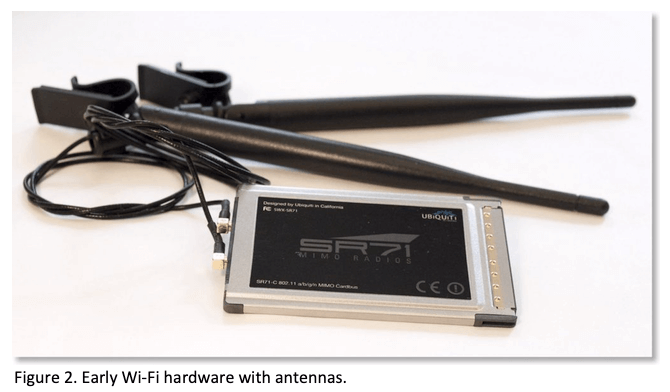 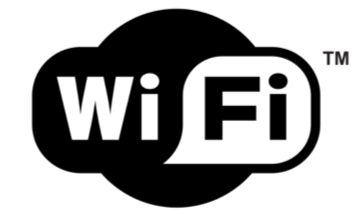 Initially, quite a few wireless devices were not compatible with each other, as the IEEE had no testing equipment to ensure compliance of Wi-Fi standards. Various producers of chips and vendors gathered together to agree on the standards for all wireless equipment.

To access the local network or the Internet, your client device (laptop, smart-phone) has chips, an antenna, and Wi-Fi software. This device would then connect to a central device, known as an “Access Point” (AP). APs are capable of handling many clients at once, but they can only send and receive as much data (“bandwidth”) as their upstream connection allows.

Typically, modern APs are combined network/Internet router devices with wireless capabilities. Earlier wireless APs were separate devices, added to an existing cabled home network. Those earlier APs were only capable of using the wireless frequency of 2.4GHz, often coming into confict with neighbour’s APs if they used the same channel. Newer APs use both 2.4GHz and 5Ghz, and have many more channels and better channel collision detection giving you faster data speeds.

The choice to use a frequency at 2.4GHz or 5Ghz is a trade-off between speed and range.

Higher frequencies have more attenuation over distance and therefore less range, but offer more available bandwidth, and as such higher throughput rates which equals better speed.

The greater range of 2.4GHz comes with the disadvantage of being more prone to interference from neighbouring devices.

Good practice when designing Wi-Fi Access Point placement in an office is to locate a high density of 5GHz Access Points with only slightly overlapping footprints to give uniform coverage and high throughput while minimising interference from neighbouring devices, such as from other companies on adjacent floors.

If 2.4Ghz is required, locating a small number of Access Points will help to eliminate overlap and interference from neighbouring Access Points and end user devices.

Channel availability – the more channels available, the greater the throughput and the less chance of interference with other services.

Despite its reduced range, the 5Ghz band has vastly more available channels and therefore greater bandwidth with fewer sources of interference such as microwave ovens, making it the preferred choice for Wi-Fi.

The technologies known as WEP, WPA, and WPA2 are the security factors for wireless communication. Each of them use encryption to make the data sent and received over wireless hidden from watchers (hackers, nosy neighbours, etc).

Of these, WPA2 should be the only one you use, as WEP and WPA have security flaws which are easy to exploit. Should your encryption be exploited, then your equipment on that wireless network (computers, webcams, etc), can then come under attack.

WPA2 has recently been demonstrated as exploitable should your wireless password be a dictionary word, or something easily guessable by a computer. A website like https://howsecureismypassword.net/ can be used to test example passwords for your Wi-Fi.

WPA3, which is soon to be released, should be resistant to currently known methods of attack. Please check with your wireless access point vendor if they plan on supporting WPA3 with your current model, or would require a new piece of hardware.

As with all security and those who try to exploit it, if it’s sufficiently difficult, they will move on to another target. The majority of those who would attempt to bypass the wireless security are just looking to get onto the Internet. These days, most devices have “guest access” which can be enabled, typically unsecured and with limited speed.

With Frequency-Hopping techniques, several carrier frequencies are used, and the transmitters and receivers are rapidly cycled between these carriers at a rate and pattern determined by an algorithm agreed upon by the participants.

The main advantage of Spread Spectrum transmission is that the signal is difficult to intercept unless the unique pseudorandom pattern is known. Using a traditional narrowband receiver, the signal will appear only as a slight increase in background noise.

Used in the first-generation WLAN technology prior to the Wi-Fi Alliance, and limited to 2Mbps on the 2.4GHz band, FHSS has lower cost performance and lower power consumption than DSSS. FHSS is more effective at lower bit rates, (under 2MBps). For higher bit rates DSSS is more cost effective, hence it’s adoption in the Wi-Fi alliance.

Spread Spectrum techniques are used in a wide range of communications systems, including Military, cordless telephone handsets, Bluetooth, cell phones to name but a few.

There many types of Spread Spectrum technologies in use for Wireless Local Area Network (or WLAN) use in the commercial sector.

With the latest iteration of Wi-Fi known as Wi-Fi v6 or 802.11ax it is possible to transfer at speeds of up to 9.6Gbps. Several orders of magnitude faster and more reliable that the first generation. 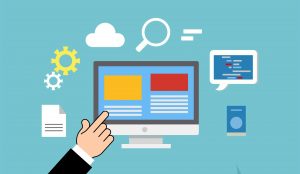 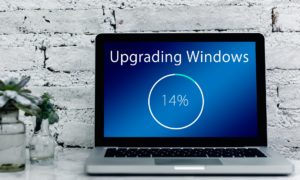